Do you have a passion? If so, how has it emerged and how did you preserved it through time? Here is the story behind the passion of Mael for insects and why we so carefully cultivate it.

When darkness falls, our children gets excited at the idea of ​​walking in the dark for, perhaps, discover an insect never seen before or be spectators of a fierce battle between two specimens. Tonight, while I was washing the dishes, Sounda and the guys  assembled their equipment: gloves, headlamps, UV light and camera. Once in the garden, discoveries were flowing: blue crabs, frogs, frogs, spiders, etc. An idea stuck in my head … What if I called the famous entomologist Georges Brossard to let him know that we had not managed to get in touch with one of his friends, who lives in the area where we are ( Manzanillo)?

I usually hate to bother people, especially when it’s for personal requests. But the tips he had given us to meet a local person that could help us discover the secrets of Manzanillo, the Bri Bri tribe, is extremely tempting … So I thrown the dishtowel, gathered my courage and I dialed his number. I know it was quite late in Montreal (8:30 p.m.), but in my worst scenarios, it just wouldn’t answer.

I had a short conversation with Mr. Brossard where he referred me to another person, whom we will meet tomorrow night. However, he told me he was preparing the launch of his second book. Amazing coincidence, it will be launched tomorrow (May 15) at the Montreal Insectarium. Several hundred guests are expected and I am convinced that the whole family would have attended, just for the chance to see one of this magical speech that only Georges Brossard can deliver. After thanking him for so much generosity toward us, we hung up.

And my brain is racing, as it always does after contact with Mr. Brossard. This time, the title of his new book gets me thinking.

After all, entomology, the science of insects, which drives many of our activities, comes from Mael’s interest. I guess we have not expressed disdain for this class of animals at any time, unlike the majority of parents. Our role was rather to encourage him in learning in any possible manner. First, we have purchased the Insectia 2 series to demystify the world of arthropods. Then Sounda contacted his director, Mr. Brossard, requesting a meeting. He’s a man with a golden heart and especially toward children. He agreed to meet Mael and it was a catalyst Mael’s interest in entomology. And this interest turned into a passion. 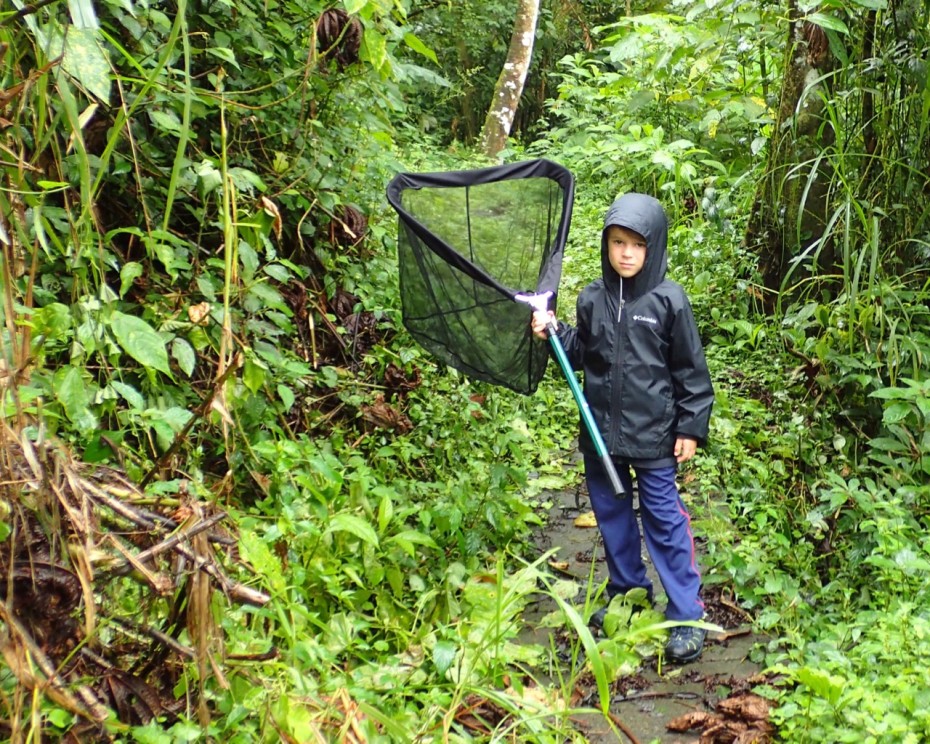 With hindsight, I already see the benefits of this passion on the life of our little guy. First, his knowledge of the different orders, families and species is impressive for a 6 year old. Then he refines his hunting techniques and his effectiveness is now formidable. In fact, he’s faster and more skilled than me to hunt butterflies in flight! He already recognizes that only perseverance and effort can lead to success if he wants to increase his collection of specimens. If he’s discouraged by missing an insect or by not finding anything new, he might miss a treasure hiding behind a tree. You should see his eyes when he spots a snake, a tarantula or a new species of firefly. They light up brightly and I can perceive how proud he is…

I got myself my own passions, which I pursued and ended up creating a game. Not that I was an avid gamer, but just as a writer fells empowered when writing, I had an interest for creating games. Over the months, that interest turned into a passion and, over the five years that followed, created an ambitious adventure game. I acquired knowledge and proficiencies in multiple areas: drawing, image processing, programming, English writing, musical composition, sound editing, special effects, narration, script writing, marketing and so on. I began computer science at university with a huge baggage of transversal knowledge. It is with this background that I could teach new techniques to my classmates and eventually start my first company in the production of interactive applications (iXmédia). I was very lucky to have parents that allowed me to follow my passion. I recognize how important it is to encourage our children to their own interests, even if they differ from ours.
Going back to Mael, he’s like a blooming flower day by day thanks to entomology. He is so proud of his finds that he does not hesitate to communicate with others, regardless of language or age. He uses insects as a conversation opener and will share stories, show specimens or advise on hunting techniques. His fluency and the amount of experience he has accumulated in 6 1/2 years makes him really interesting. And if he can not make himself understood in French, then he uses English, his few words of Spanish and a great deal of hand gestures to deliver his message.. 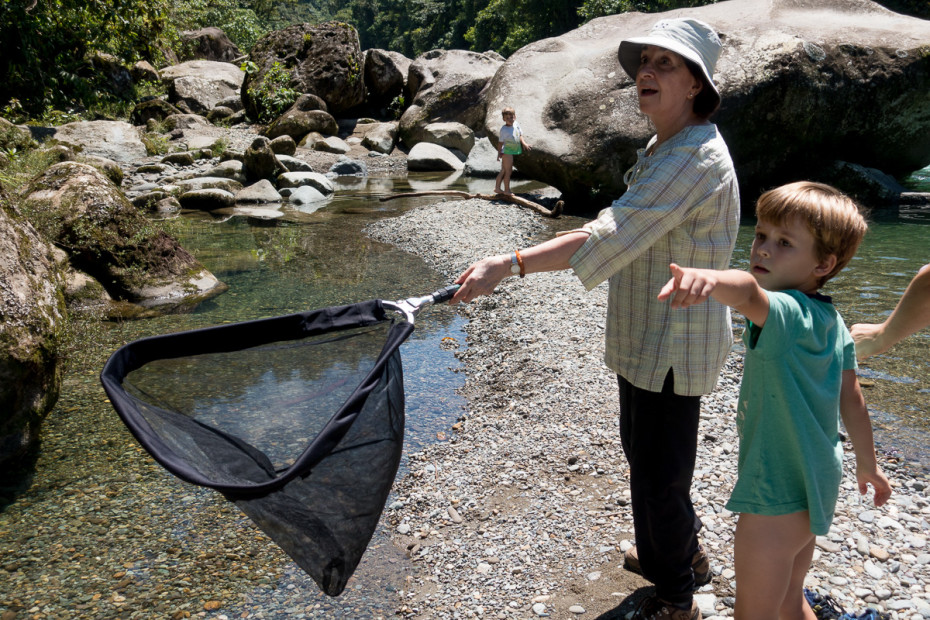 His passion allowed him to overcome one of its most visceral fears. Only 18 months ago, he wouldn’t dare to venture into a forest, in broad daylight, with his father! Now he knows, through the Insectia series, that the vast majority of insects are nocturnal. To observe and increase his collection, he must get to know this new dark world, filled with frightening shades, new noises and strange lights. Today, he was ecstatic when we said we could get out in the jungle, armed with only a small flashlight to confront the monsters of the night.

In his personality, Mael has a propensity to easily be discouraged, and will stop to perform a task if he encounters any difficulty. This is not uncommon during our school sessions and especially when solving mathematical problems. When that happens, he rush in his room, crying and shouting: ” I am such a zero! “, ” I am good at nothing! ” However, today he experienced a major failure in his passion. He, even if he thought he knew everything about scorpions and in particular how to manipulate them, was stung. George Jr, or Centruroides limbatus as scientists call it, is a small scorpion that many fear, until they get sting because it is harmless. The sting, which was in the case of painful Mael for about 15 minutes, is similar to that of a wasp . This is an experience without any consequences, unless you have an allergic reaction. 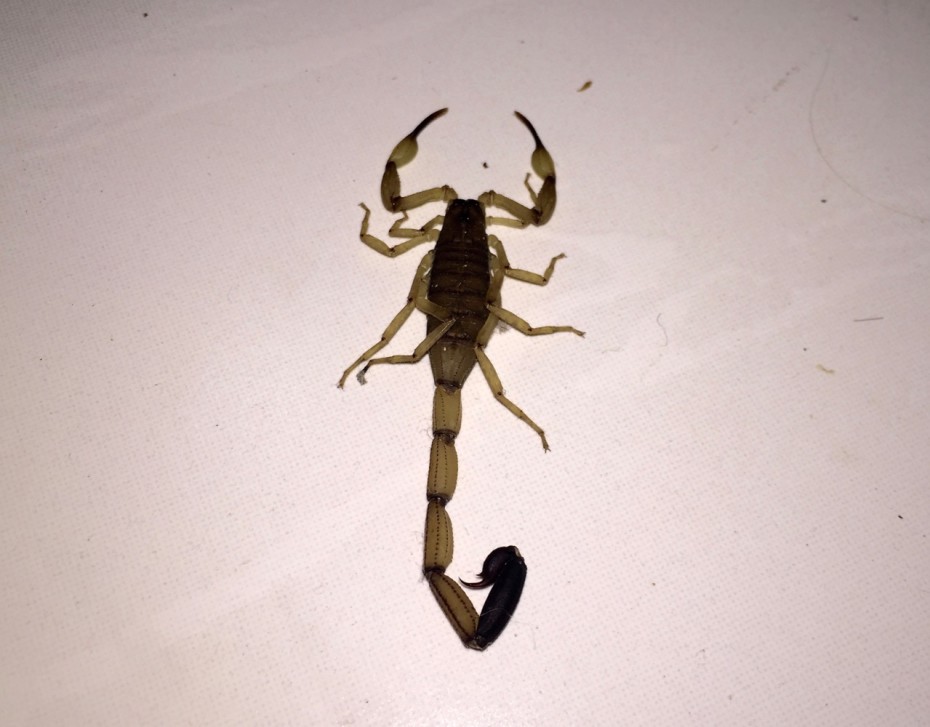 This is not the first time he is bitten, sting or pinched and this will certainly not be the last. As parents, it would be easy to erect barriers to stifle his sense of adventure and discovery by impregnating our fears. Instead of succumbing to this trap, we develop an expertise to identify specimens that could be really dangerous and thus guide his exploration. Then, when subjected to setbacks like today, he learns by example the most important lesson in life: it is by making mistakes that we learn the most. So don’t be discouraged when you don’t understand, or if the results are not as you wish. This is part of the normal process of learning and in fact, we learn a lot more when we make mistakes. To excel, we should undertake projects that seem difficult or impossible to others!

But the greatest quality Mael is currently developing through its passion is self-esteem. His ability to spot insects or other animals is such that manages to impress local guides. Praise for him are numerous and thus he realizes that he has a talent of is own and should make him proud. His passion for entomology is essential, because it gives us, as parents, all the tools needed to comfort him in difficult times of his life.

In the long run, it matters little whether his interest in entomology will turn into a profession in this area. What we know is that our role with our children is to provide the fuel to ignite their passions. Through these, they learn about themselves, they realize what it takes to recover from failures, but above all, that they can be proud of what they can accomplish when they go beyond their own limits.

I don’t know what Georges Brossard will unveil in his latest book*. In his first book, “Audace et démesure,” he tells us more about his many interests. While he is known for his important contribution to the world of entomology, his career is amazing in many ways. It is his boundless generosity towards children who knocked us on our two face-to-face meeting with him. I look forward to reading his new book!  I can assure you that we will get a copy as soon as we return to Quebec!

* Now that the book came out, I learned that the full title is “Maudite Passion”. This book is an autobiographical novel where Mr. Brossard relates to one of his hunts in South Africa.