A swordfish on the menu

Our second day at sea was still passed to the close hauled or knitting to find wind. The engine for 13 h was used to avoid the speed goes below the 5.0 nodes. Comfort on board is still fair and we have another two days to endure this uncomfortable pace. At least, since this morning, the wind gives us a slight respite: it has changed direction allows us to pick up speed. We have flirted with 9.2 knots with code 0 and 16 knots of wind.
Yesterday all day, the sea surface was sparse of algae known as the Sargasso Sea. Each of our fishing attempts led by a hook full of grass. So I stowed the fishing rig and said package for the day… An hour later, just before sunset, Serge goes behind the boat and note my lure that touches the surface of the water at the discretion of the waves. The fishing rod is normally stored in his basement, but instead of removing my lure, I left it in place and pendouillant to 3-4′ of the boat. A thought touches his mind: and if a fish jumped on the decoy overnight?

Barely had – you it diverted his attention and his eyes on other things, a movement attracts his attention at the back of the boat. A swordfish out of the water! It reviews the jump a second time and the general alarm is sounded on board! I jumped out and time to see the 3rd jump from our outlet. Wow! The reel unfolds at a frantic pace. This is a new purchase and I am not very familiar. After having tried in vain to slow down the rate of fish by putting the brake up, Serge told me that there is surely something else. I remember then an another setting that the seller showed me and after a few attempts at the limit of my strength, the idle reel and comes to stop.
Now that the prey is railway and the cane is stabilized, we must slow down the boat up. It returns the Genoese and slightly altered course of the vessel to advance only very slightly. Now we must think to show this socket on board. Serge considers it to 4′ long and we know that it will be quite a challenge. The priority is to change the cane from location, to allow me to bring the fish to the boat, but without giving him the opportunity to win by going under the boat. I also lost bream allowing them to touch the boat, then it is also something that should be avoided. Serge is positioned with the Harpoon grab fish by the gills, Carl with the line into the hands to assist him to reassemble it on board. Everything is ready for the fateful moment.
Now, there are many our prey of the abyss. Ouch, this is big, very big! Everyone at his workstation, ready for the man recovery work. Serge managed not immediately catch the gills, but succeeds on the 4th attempt. For my part, I did everything I could and now it is Carl to play. He pulls on the line and swordfish nose touches the rear shelf. “Soon, have to drag him aboard!” I cried. In less than two, here’s our lying in the cockpit. In fact, it occupies almost completely! Serge brought rum and I him serve copiously in the gills. Immediately, our relaxes…

Expressions of Carl will remain forever etched in my memory. “It’s big!” which he repeated with mixture of amazement and surprise. Not only ill was very impressed by the size of this plug but he realized the implications: was – return you it to the water?, why kill a beautiful beast? as – you we really need all this meat? Swordfish at that time trembled with his last breath. It was too late to convince us to water… And pork he had to prepare for dinner, also had sacrificed it his life for us to eat. Today in our modern society, we buy pieces at the grocery store without really seeing the beast that was sacrificed for us. Carl had been fishing for Sunfish in his childhood, but he was struck head-on by this reality. Power us on board, to kill, skinning, and Threading. The result is as if we took a package at the grocery store, but here we see all the stages of the process and we become more aware of our environmental footprint.
After raising the beast that eventually was the same size as Carl (6′ 2 ” of the tail at the end of the snout) for some pictures that prove our feat, the task of preparing the nets began. It was entitled to a hilarious moment, when Carl approached the hand from the mouth of the swordfish after I had threaded one on the side. He would return the carcass so that I can do the other side. Suddenly, he realized that his hand was could be bitten and he had a reflex movement to remove it quickly. I told him: “UM, I think that it is well really dead and that it not bite you at this point…” It was a good laugh!

Carl dinner (pork with apples) was a delight, as well as dinner that Serge has concocted with the best threads of swordfish (swordfish believed in coconut milk, how Tahitian).
****

This morning, we saw dolphins for the first time of the trip, but they preferred not to come play next to the bow.

At the time of this writing, we just cross an another sailboat less than 2 nautical miles. His cap is different from ours, but our destination is most likely the same. Our choice of route is to stay the most possible South to away us from a depression that will bring bad weather near our road. 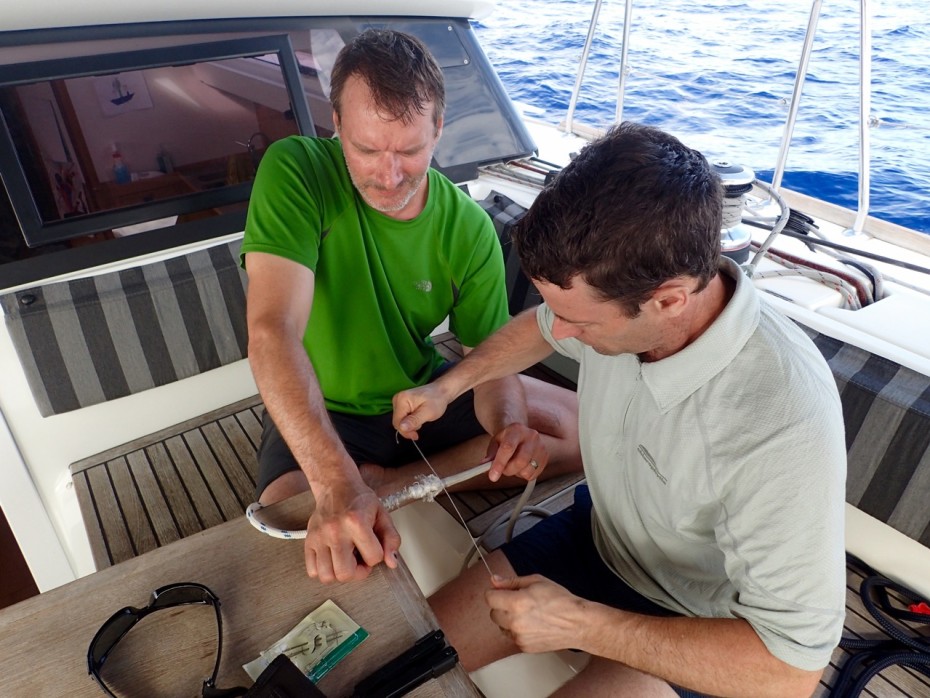 Splice on board workshop to repair a broken listen 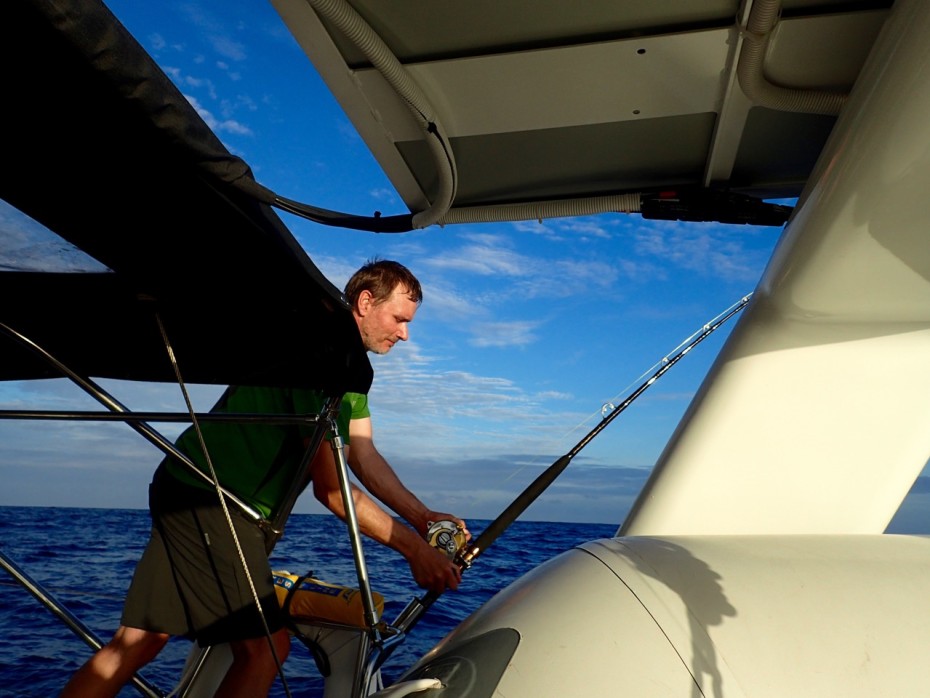 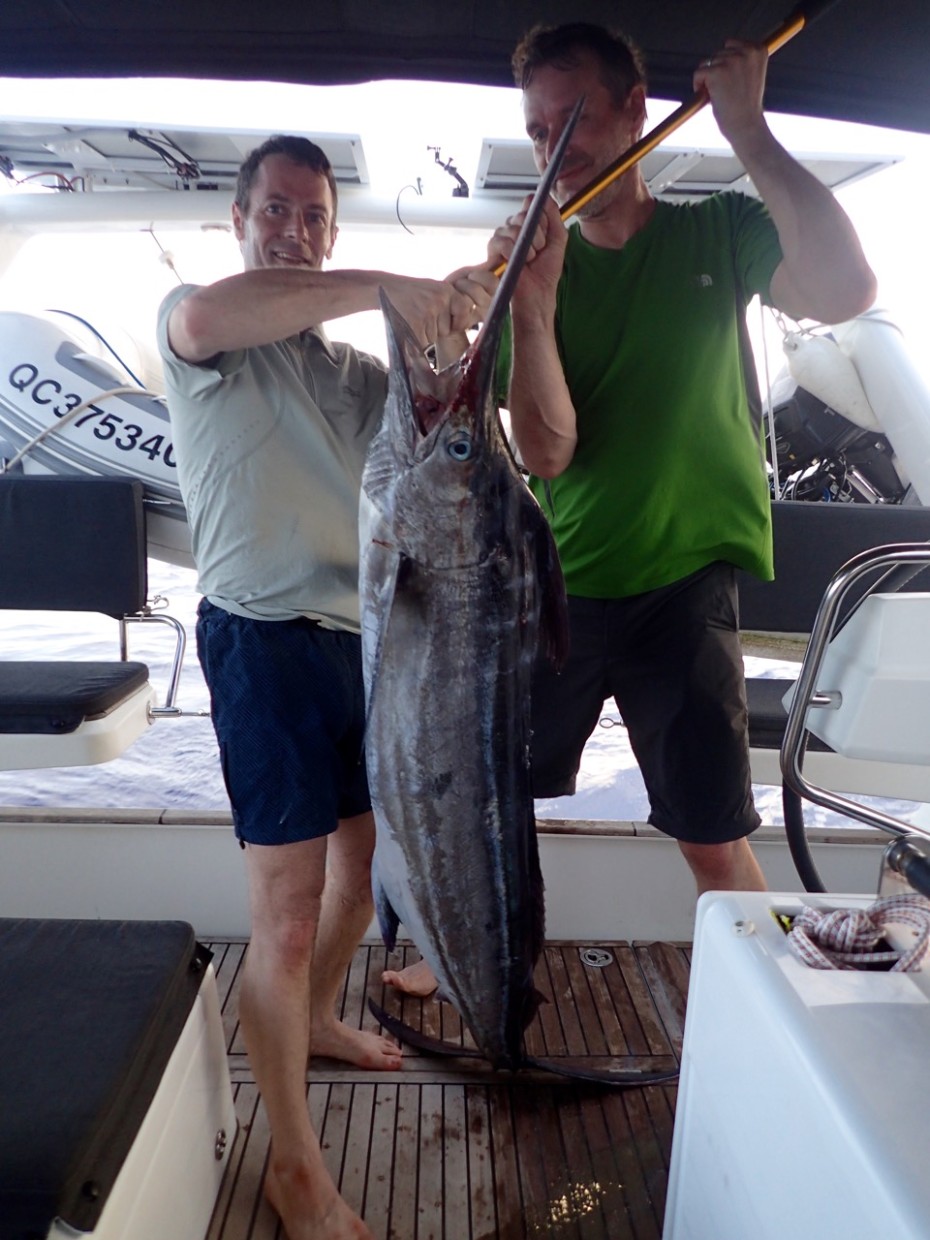 The beast! This will be our only outlet of the trip.