A gust of wind

Autumn approaches and all signs of his imminent arrival have manifested. The cold and the stronger winds are two elements that diminishes our quality of life on board. We must therefore replace swimming with hiking and do as much schooling as possible to have the feeling to accomplish something useful in our days. The boat begins to show us that she needs love with some systems that begin to fail, such as the watermaker. Days pass and we begin to imagine ourselves comfortable in a big cozy and stable bed. Psychological preparation for our return home are taking effect… 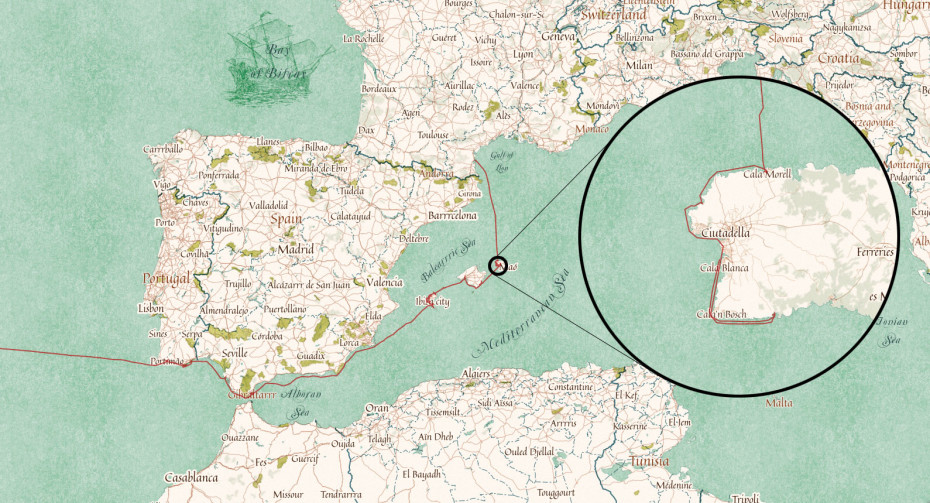 Our days are now numbered in Minorca in the Balearic Islands and we start to analyze the weather to take the next weather window that will allow us to reach south of the France. We are positioned on the West coast of Menorca, near the town of Ciutadella. It is the former capital and the 2nd largest city in Minorca. Of course, why not take the opportunity to stroll through the narrow streets of this charming city?

Instead of a lull of winds and waves, the weather provided a low-pressure system that would bring us winds of 35 knots gusting to 50. (x1.8 for km/h). Winds were coming from all directions in the preceding days, which somewhat limited the choice of sheltered anchorage. I opted for a tiny cala, with two lines attaching the stern of the boat to the shore. 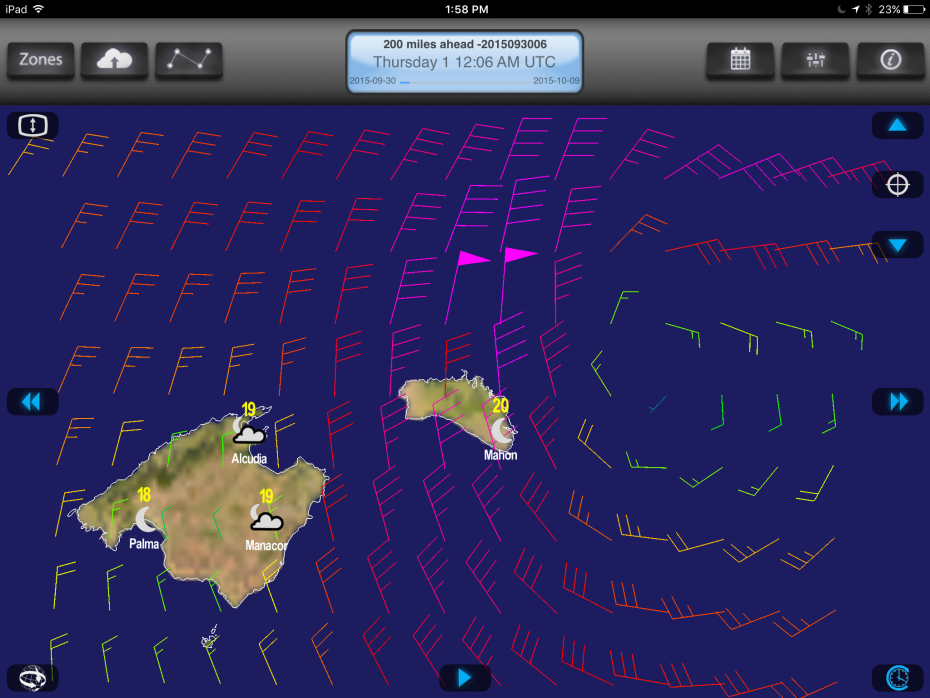 As soon as the wind really rose, these two lines are broken. Fortunately, the same thing happened to the nearby sailboat, which made our two mobile boats on anchors. Jayana is not very comfortable by strong wind at anchor, as the boat draws from ‘ is in the water at the end of the string. In English, they use the phrase: “ride at anchor” and it looks pretty much like this!

During the night, part of the bimini was torn away by the wind. To 2 am, I was in could ensure in the rain and cold. I decided to take advantage of a lull between two bursts to weigh anchor and go to the South of the island. Exiting from the cala, we went through waves of 8’. Fortunately, it was not long (30 minutes) before a tip and half an hour later, the anchor fell into a large shallow Bay. I have installed a 2nd anchor to stabilize the boat and stored the brothel became the large sail when the straps broke when we were downwind…

The worst thing is when we sleep at 5 am and the children get up at 8 am full of energy!

The next day, we wanted to do a small quiet day… After a morning devoted to school work and repairs to breakage of the eve (whose riveting a lazy jack on the upper pulley bar arrow), we went on the beach for a picnic. It was perfect to be absent from the vessel because the wind turning offshore and the waves began to enter the Bay. Could be dinner quietly watching the boat to be brewing in the distance.

Around 1400, it would return to find a new place where it would be well away from wave. After letting my crew on Jayana, I went with the schedule to retrieve my 2nd anchor and it is at that time that I lived my worst moment of the trip. The engine of my schedule has stalled and I was unable to before restarting. Waves and wind grew me on the Bank and I had no choice but to return the anchor (a spade of 20 kg) to stop my drift. To my surprise, the anchor was not hanging and I pursued my drift on the coral! Obviously, a certain distance from the shore, the waves broke and I almost be returned in two waves. The dinghy full of water, the drift toward the coral, I had me describe to fail me and probably end up with a wreck pierced by the coral.

While dozens of passers-by walked along looking at me as an idiot by continuing their way, a kind soul has understood that I had a power outage and offered his help. I threw him a rope telling him to pull me towards the beach of sand. He complied, and thanks to him, my schedule has suffered minimal damage. This has not prevented me to find myself with a bath (she was full of water), but at least I was on the Mainland. When I had a look on Jayana, the entire crew was on the bridge and did not know what to do… Me not more than elsewhere!

After emptying the water, I was surprised to see Jesse swim towards the shore, facing the waves! She brought a VHF which had more battery… Finally, we developed a plan to bring annex to the boat. Tying all ropes, I had enough pieces to connect the boat to the beach to tow the dinghy. Jesse is therefore returned to swim on Jayana to give instructions to Sdgsdgsd. When everything was ready, she returned and the plan was to push two the dinghy Jayana, attach it to the rope and towing it on Jayana. Before you put me to swim (with some concern because I no longer had any force!), I decided to try an ultimate attempt to start the engine… .. .which began to purr! It was simply drowned by my dirty carburetor! Speed, we set up in the annex and I was able to bring annex just next to Jayana until the engine choke again. Phew! It was less a…

Of course, searching for a calm Bay is dragged… All places in the West of the island was stormy and it would have been impossible to sleep. After having surveyed the West Coast in its whole, our anchor touched bottom at Cala Morell around midnight. A Bay which proved to be wonderful to wait for our weather window for our last navigation. 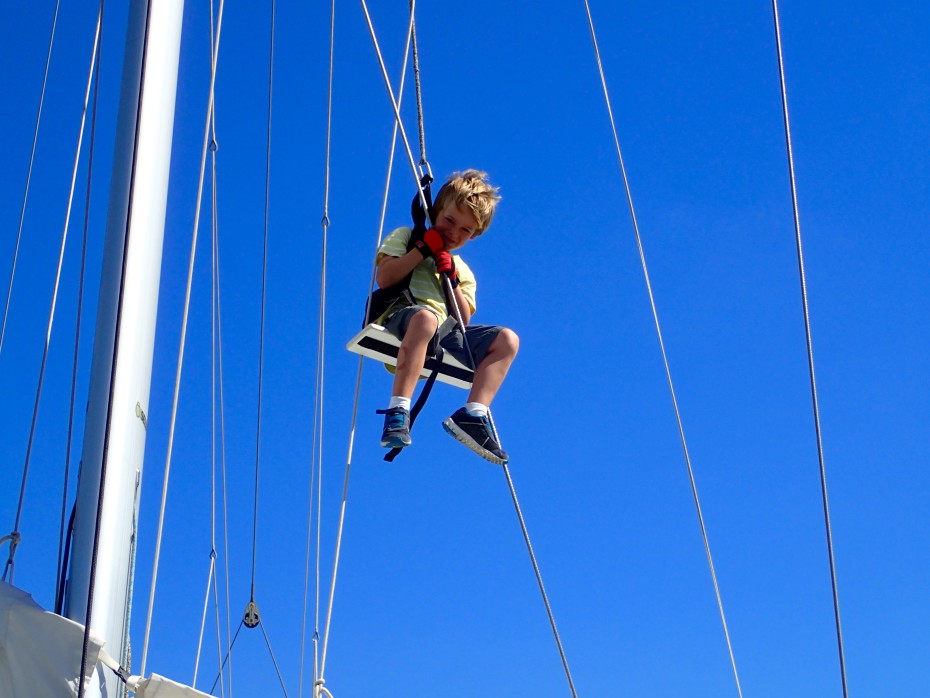 MAEL, after having seen Jesse-Clare mount the mast a few days earlier, wanted to do the same… 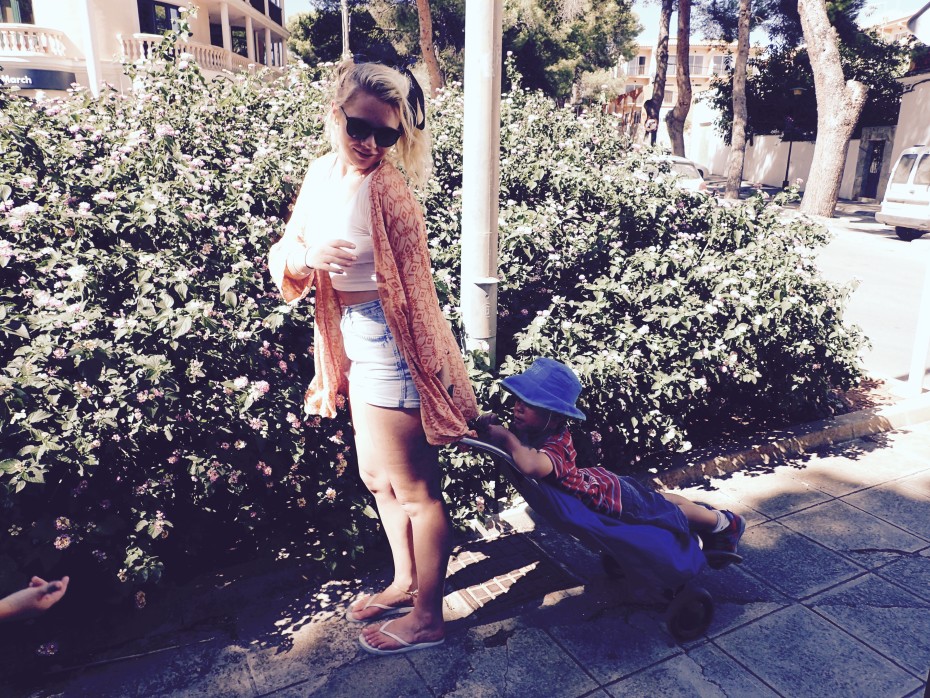 Lohan has migrated from the stroller to carry bag! 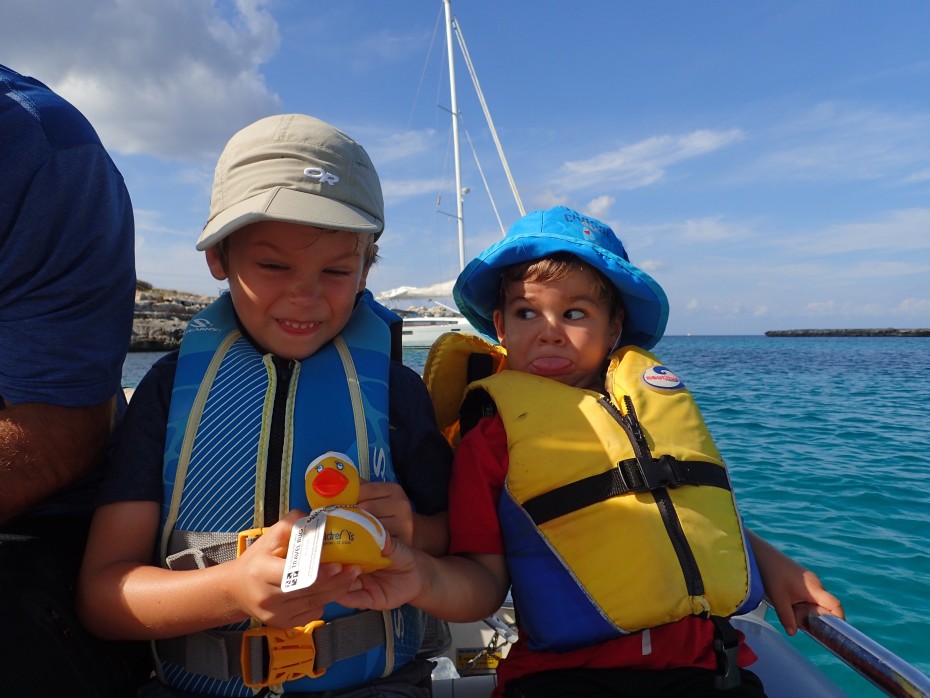 They have smart air, my gang of merry men… Máel holds in his hands a Travel Bug we found in a geocache in the Azores. It comes from a child who dreams of traveling following its remission of cancer. 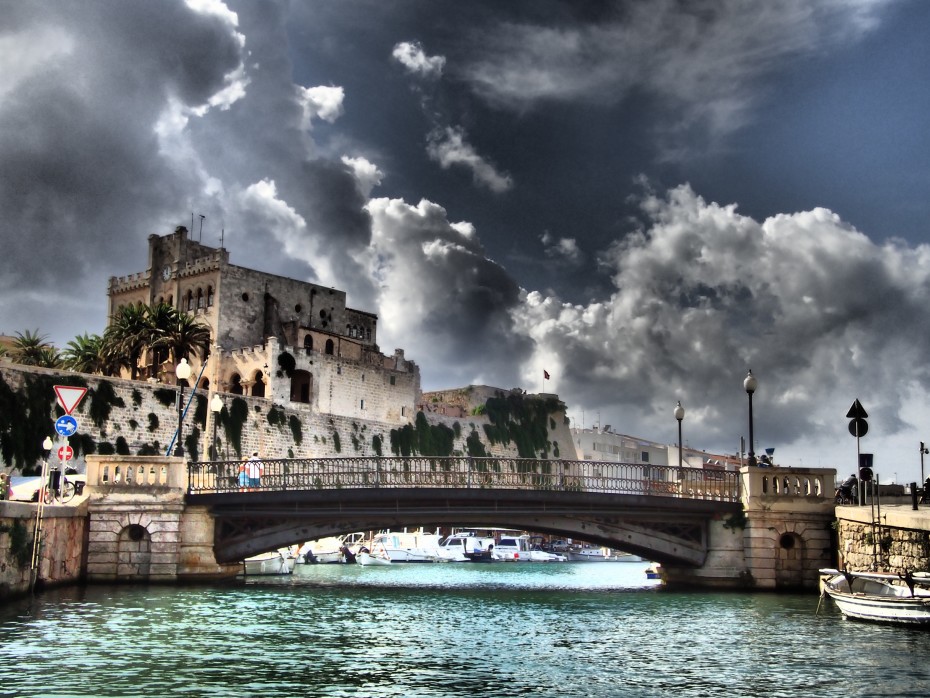 The 2nd city in importance (and surely the most beautiful!) of Minorca: Ciutadella. 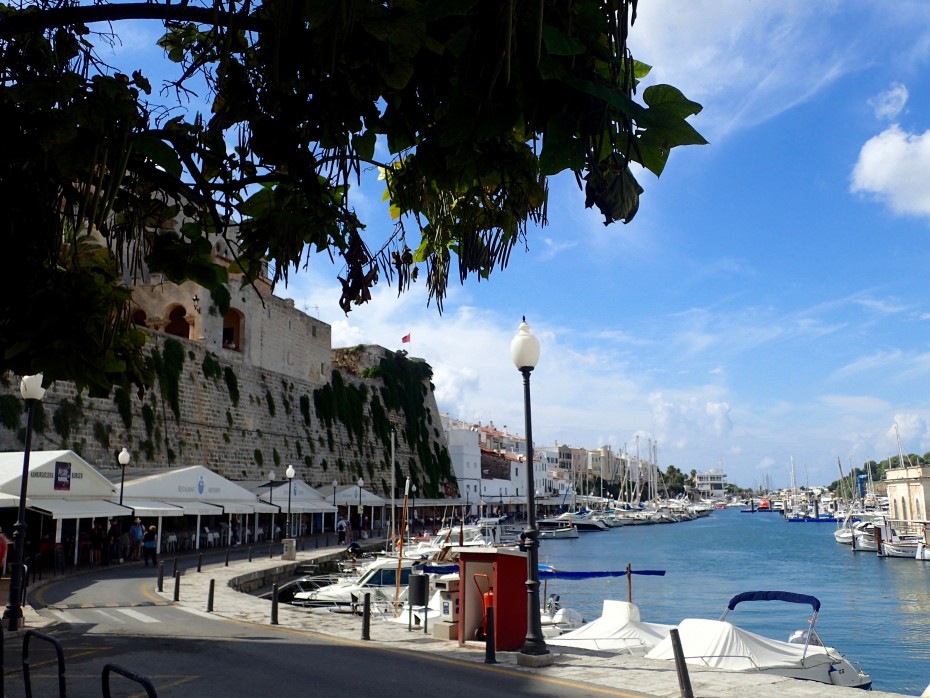 This is not a river, but indeed a Bay (cala) very long and narrow. 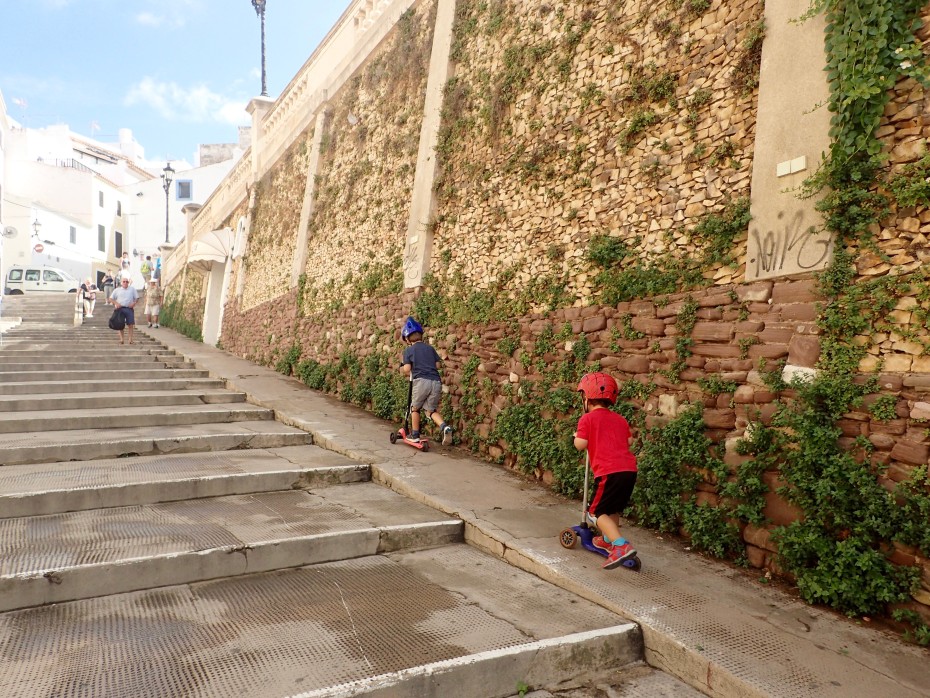 The children return to the happiness of scampering. 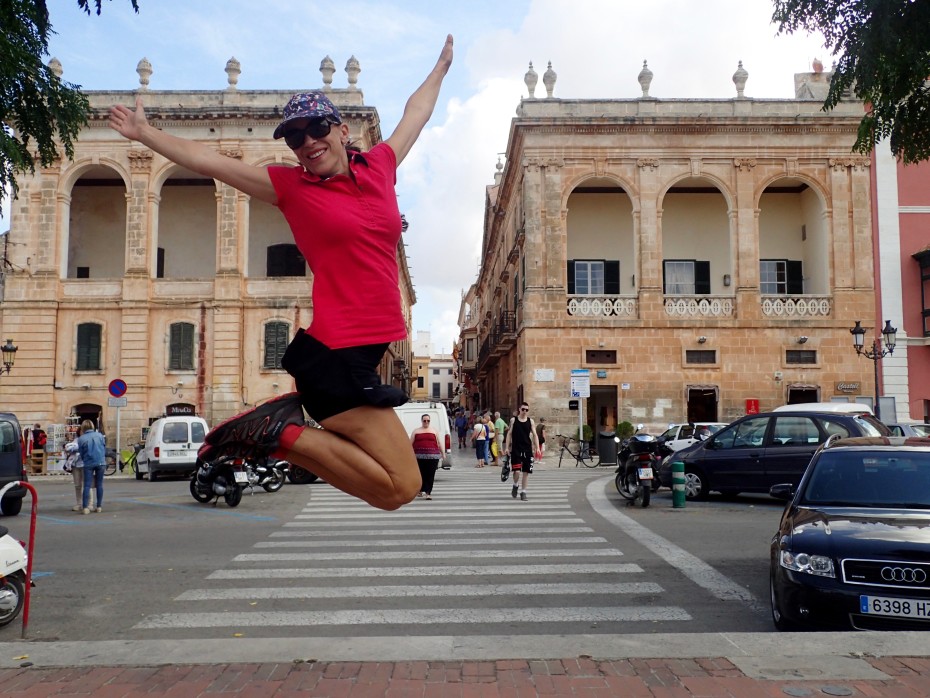 Sdgsdgsd, is that you are happy to be in Europe? 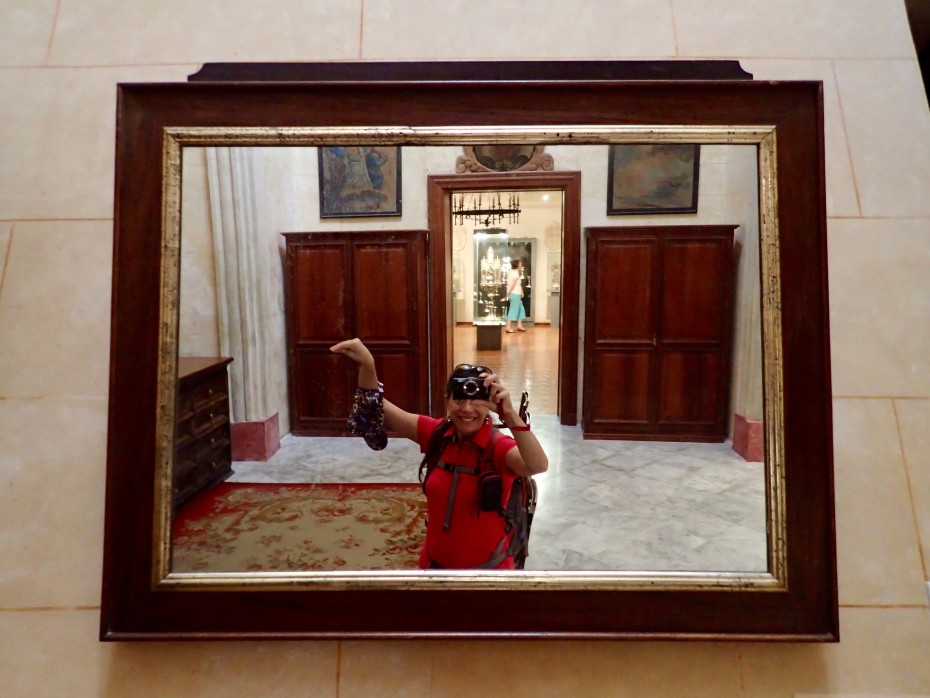 A designer at work: selfie in the mirror with an arm imitating a Swan (or is it a half of Egyptian poses?) 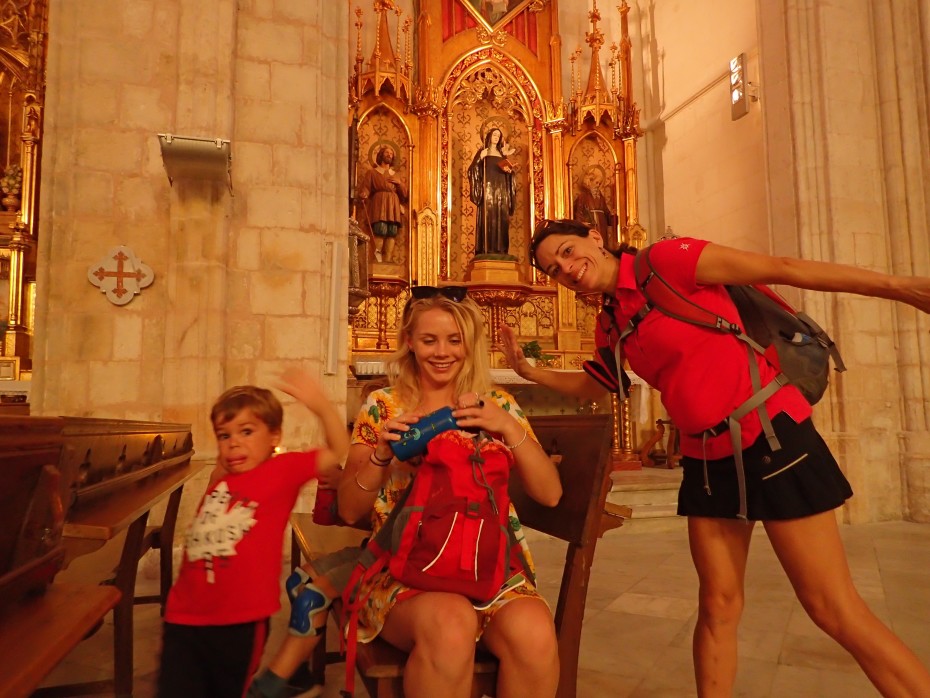 The seriousness of the crew in the Church of Ciutadella. 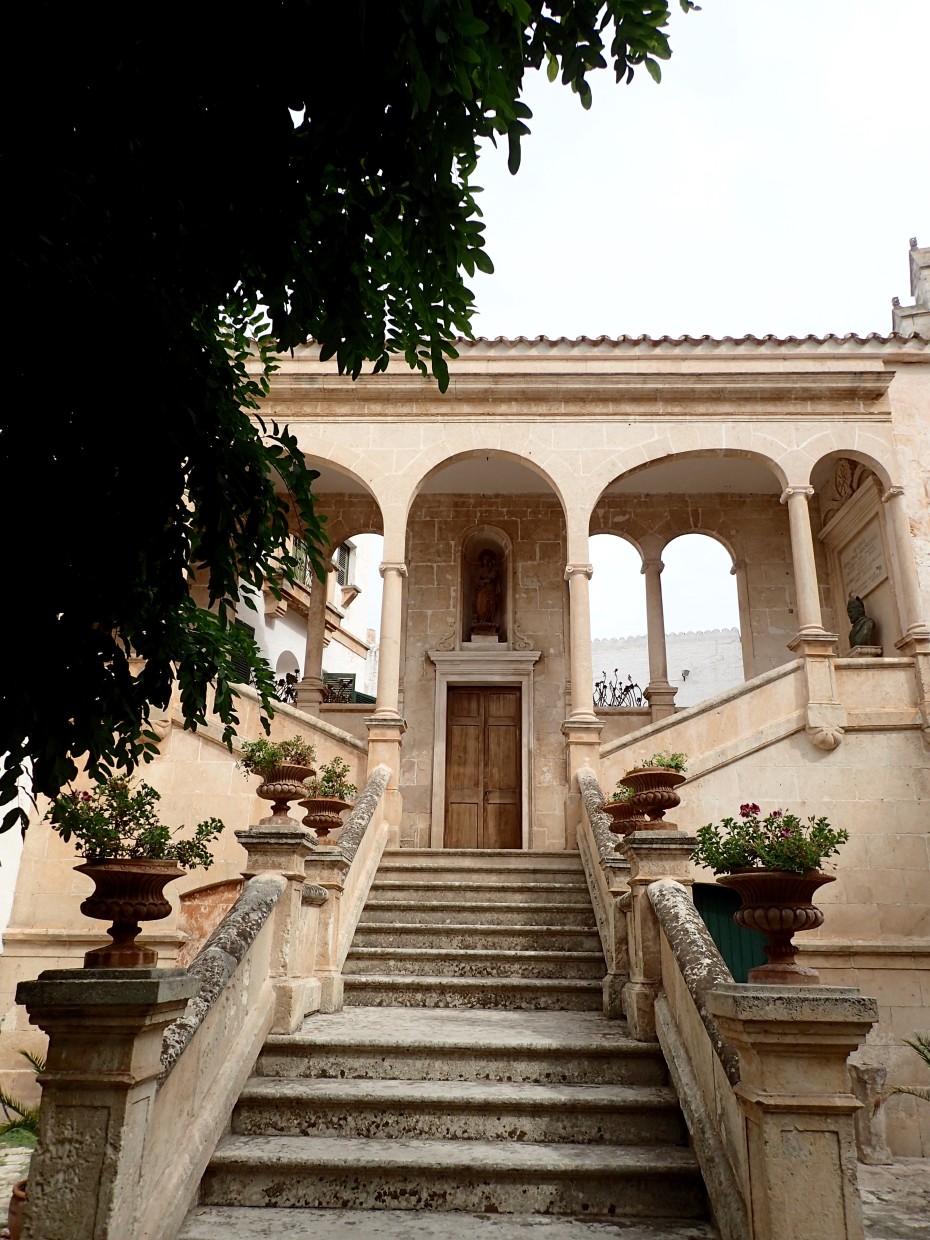 The House of priests. 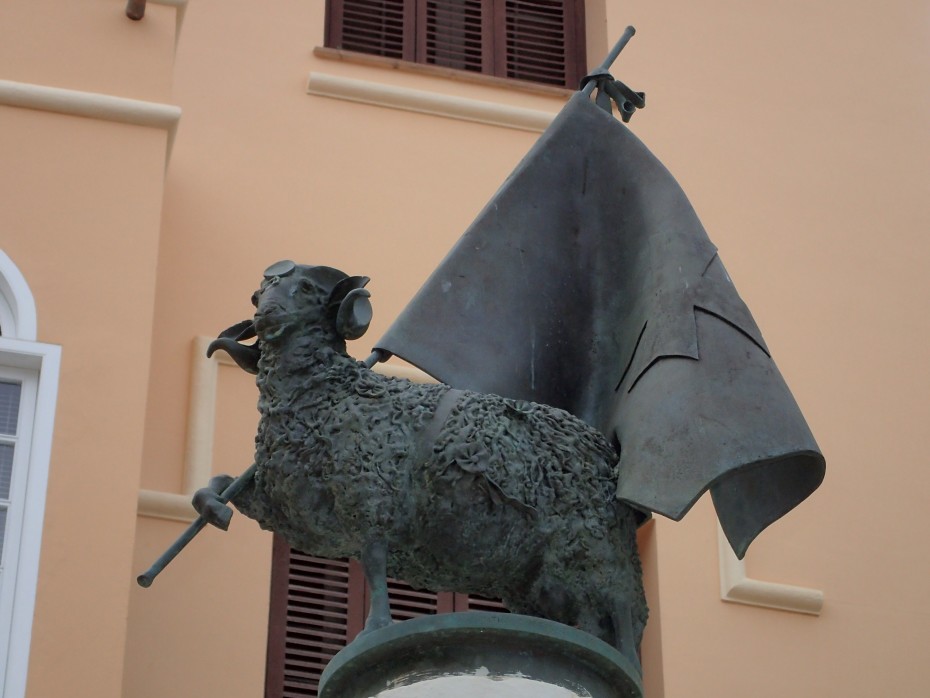 A statue representing the Paschal lamb, a Christian symbol… 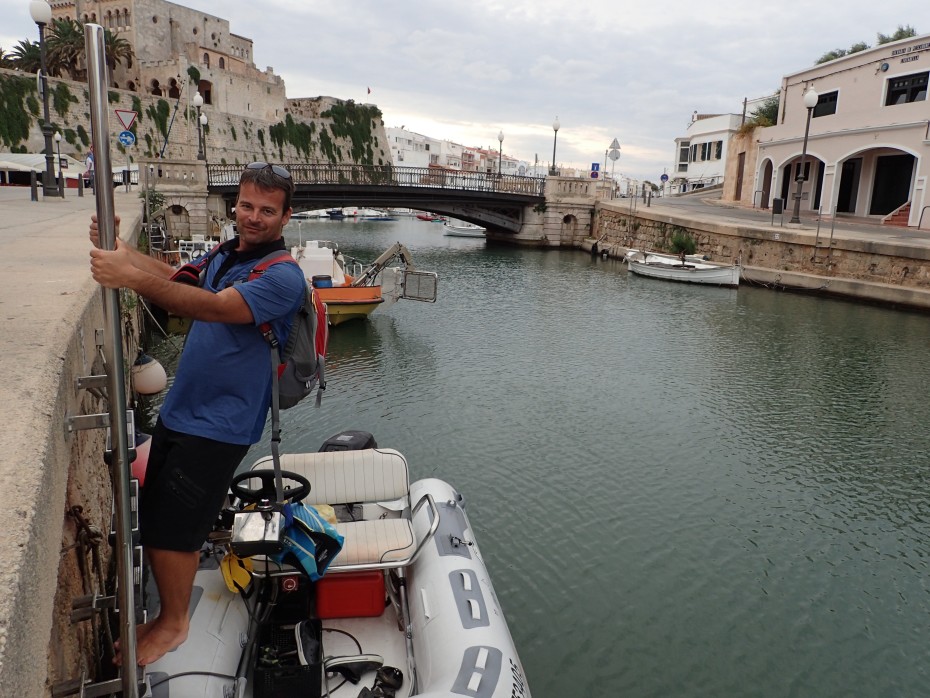 Our ‘parking’ in Ciutadella has the pus beautiful scale of travel. 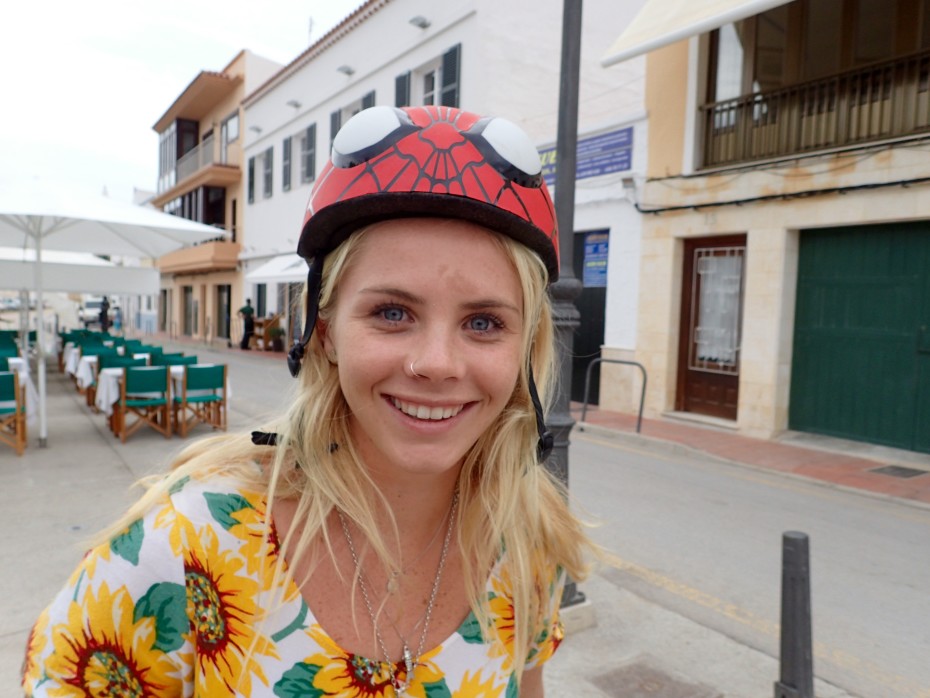 Jesse-Clare is delighted by this ground stop. 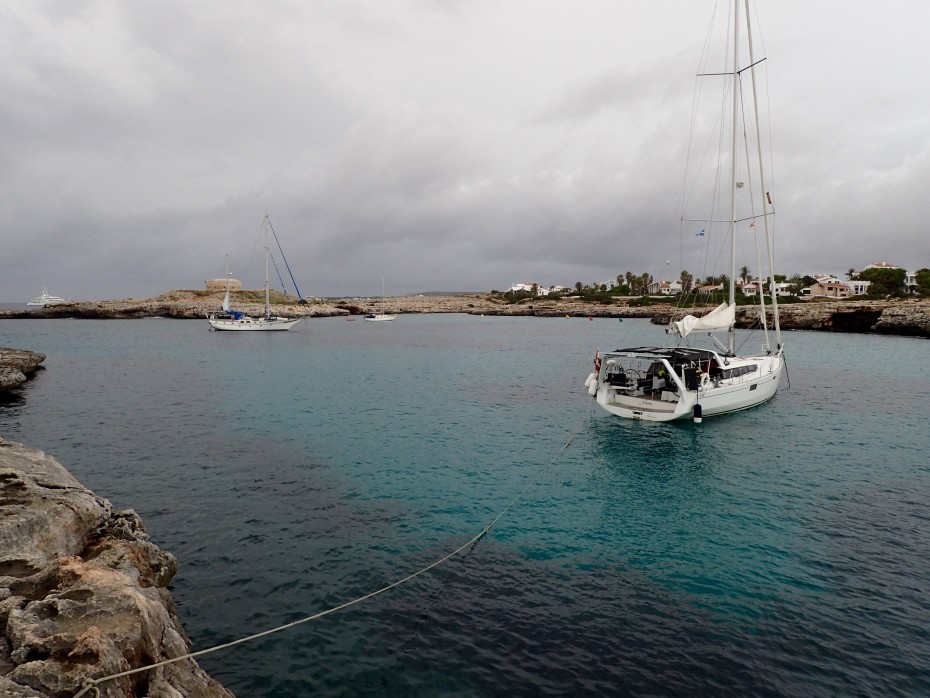 Secured to the ground, I thought to twists that we would be able to deal with the bad weather of the kind. 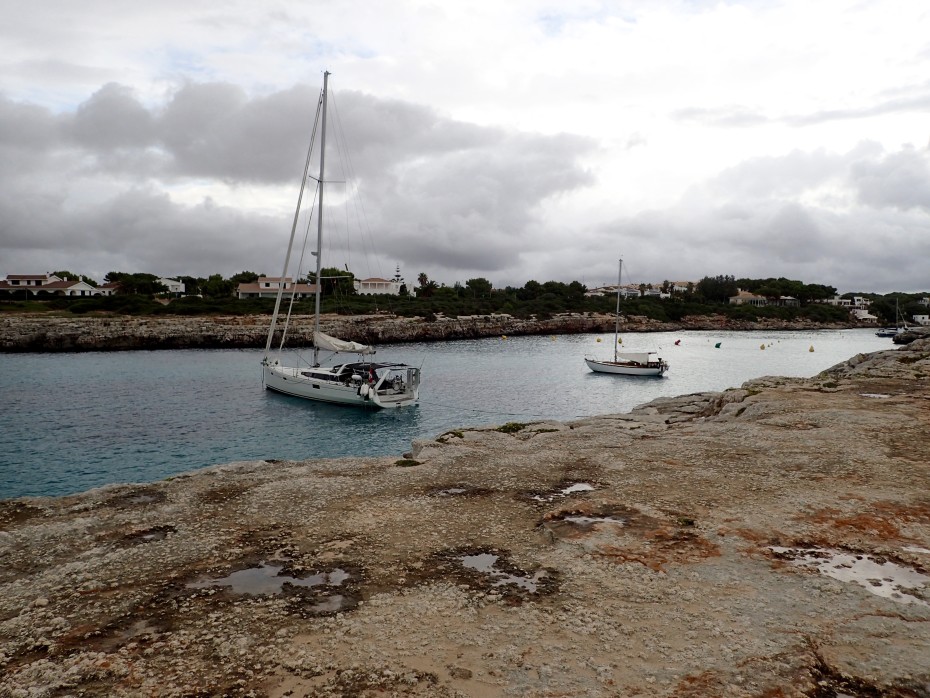 Jayana and neighbor (small), which will be sandwiched between us and the cliff during bad weather. 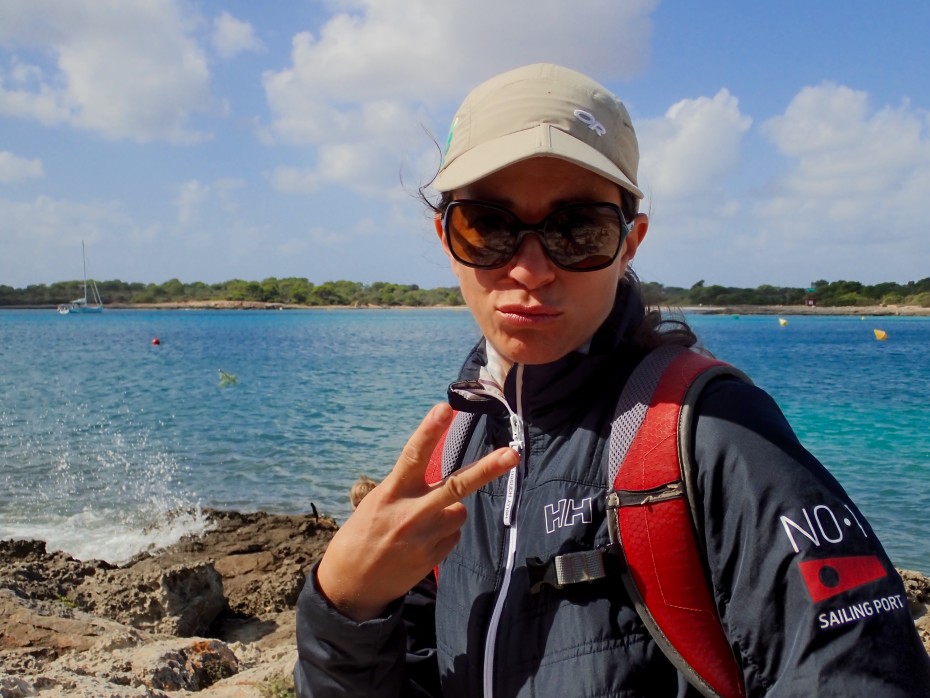 An excursion to Earth well deserved after a sleepless night and repairs that were needed after the damage of the previous day. 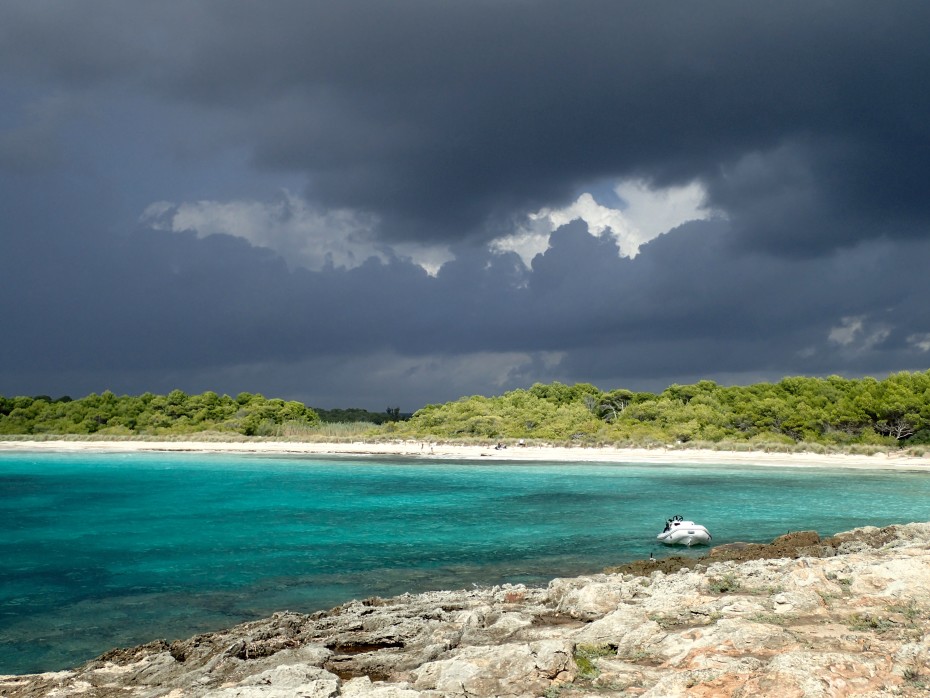 A grain with rain and thunderstorms spends close to us… 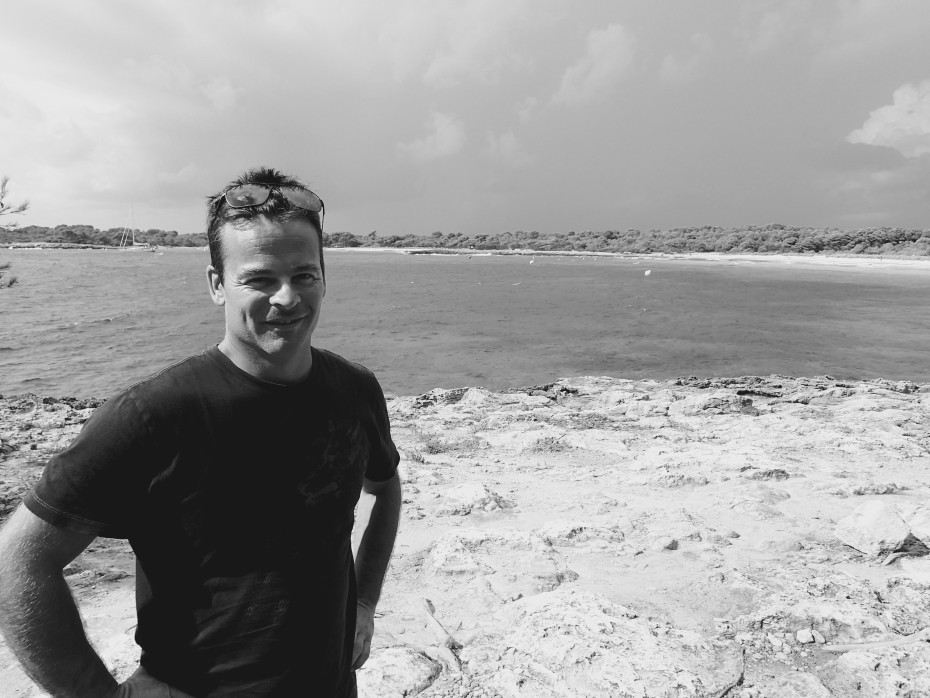 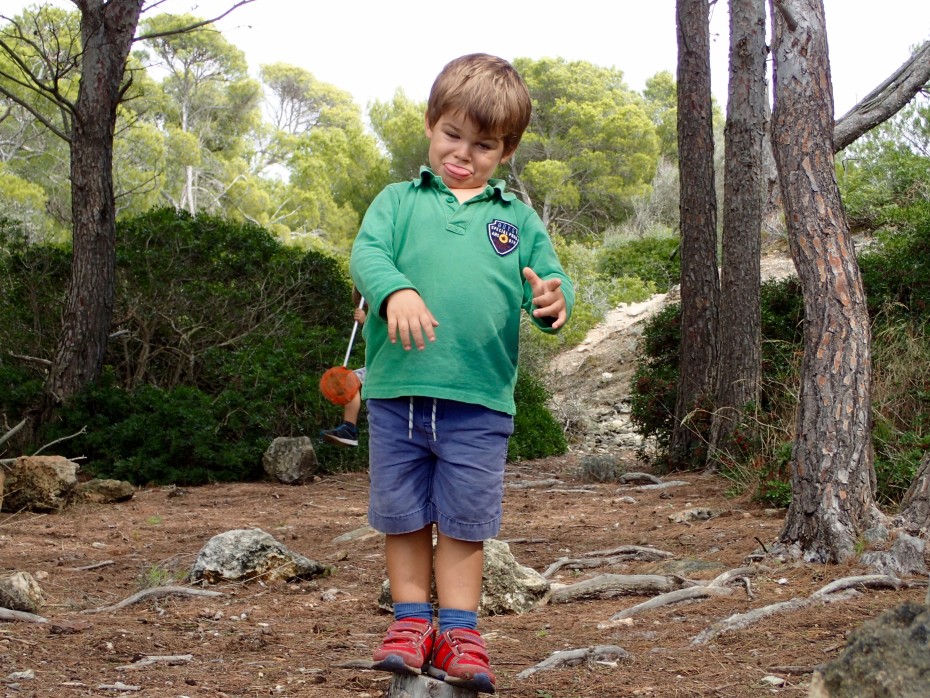 If you need a scarecrow on your land, Lohan is excellent and its tariff is affordable!

Cala Morell: one vaguely has the impression to be landed on Mars. 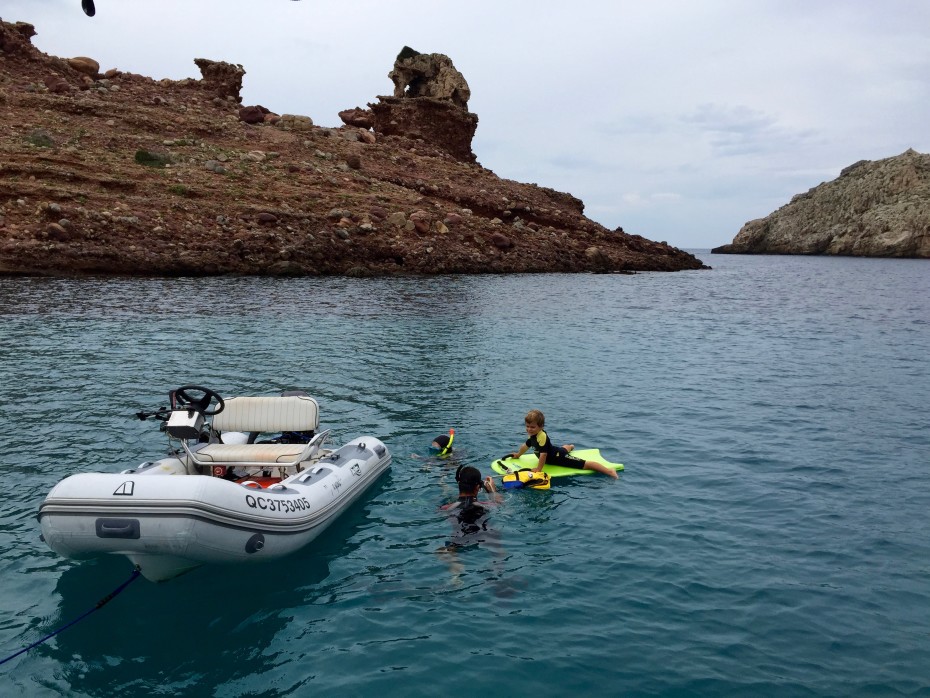 Last meeting to Wade. The wet suits are necessary and it is still cold enough…