Finally, our stop at Rota lasted ten days, which were well filled. After enjoying the beaches with Veronica, we left to the ancient capital of the Spain: Seville. On our return, it was the supply of the boat and preparations for the last two months of our trip. It still took the time to take a ferry to get to Cadiz, history to pay tribute to the oldest city of Spain (having a continuous presence) and one of the first in Western Europe.

Then, it was a beautiful day sailing to Gibraltar. The wind and the tides were with us and it was a beautiful crossing. Our arrival was more difficult, with a failure to enter in the marinas of Gibraltar (as there are two that are always crowded). We retreated to the nearby marina, which is located in Spanish territory. The worries with the bow thruster made choir on the nearby pontoon, but there was more fear than harm. 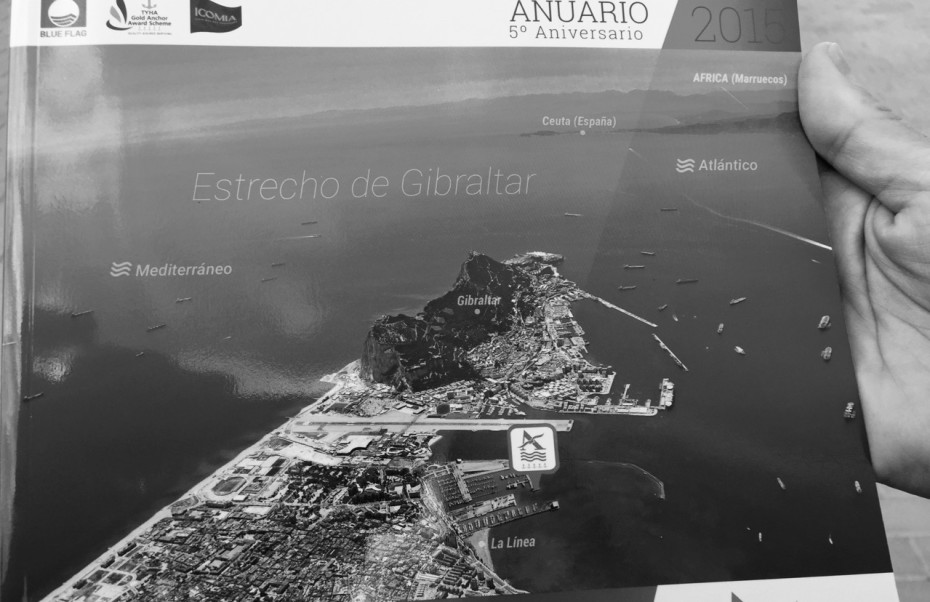 In this photo, we can see why Gibraltar is the nickname of "The Rock". This tiny British territory located across the airstrip. The main engine of the economy is to be a tax haven, attracting European companies to establish their headquarters and thus feed accountants, banks and lawyers in fees. The second source of money are the monkeys at the top of the mountain, which remains an international tourist attraction. I had promised the children that their patience in crossing would be rewarded by a visit to "the mountain of monkeys". They were not disappointed! 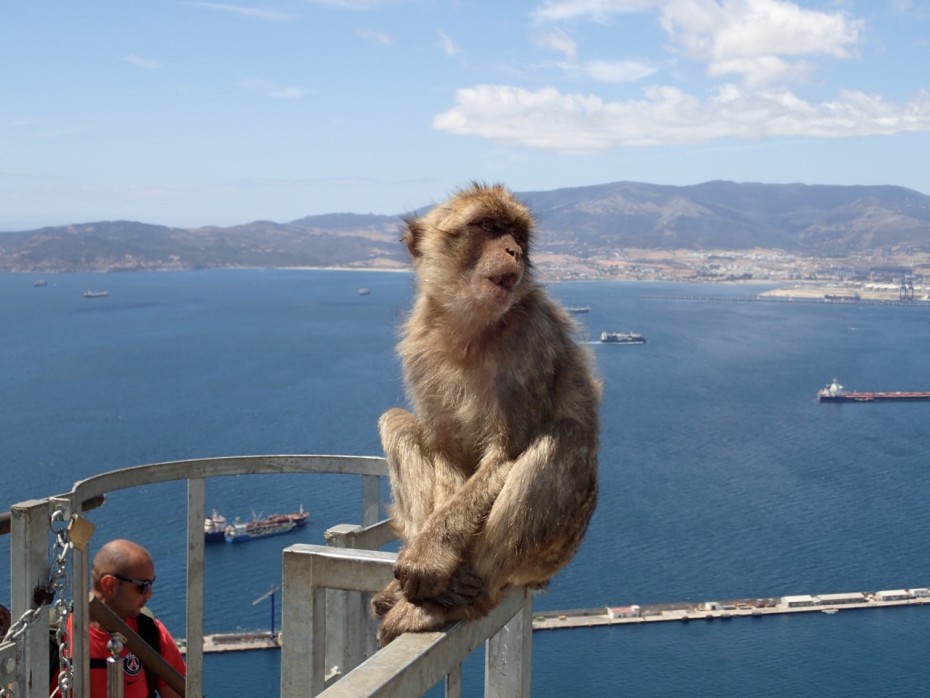 But before you meet this rather bored specimen (he yawned crows when we took the photo), we were to go to Gibraltar from our marina in Spanish territory. No problem, a walk of about 10 minutes and we were at the customs, to cross the border on foot (a second experience of the kind to me and Sdgsdgsd, the first time it was between the Thailand and Laos). Then, small taste in town, not without be watered cider, my beverage of choice in English territory! 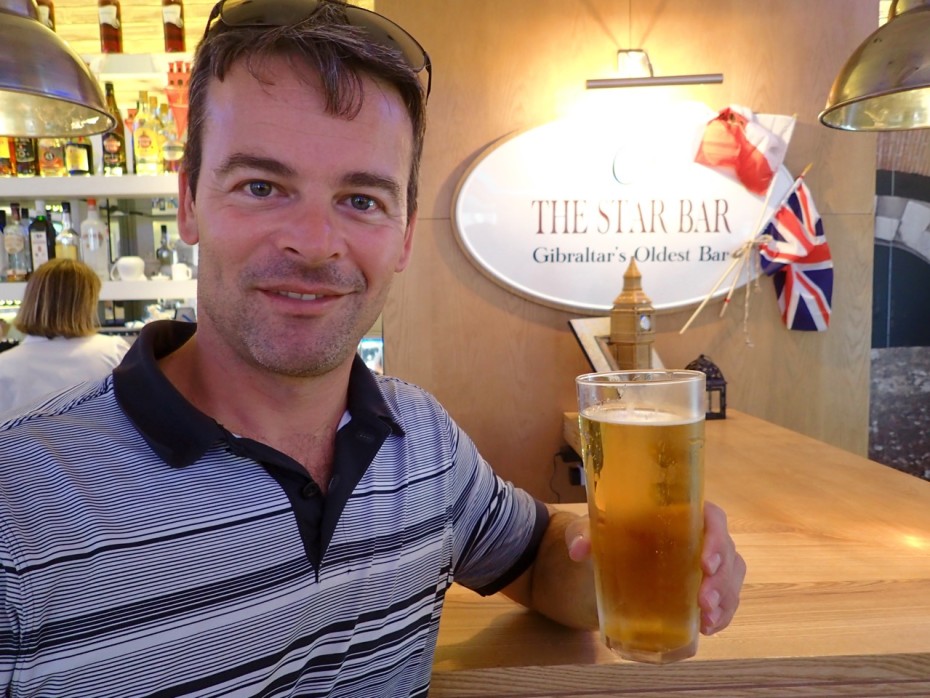 After being full, we made a stop at this place, for my greatest happiness. 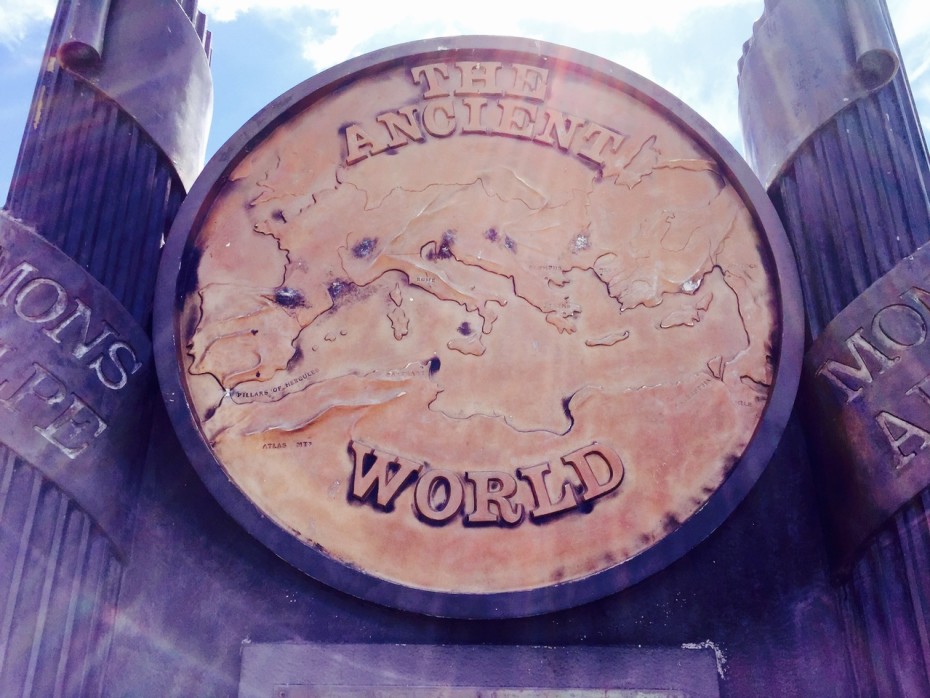 It is the mythical place where Hercules, during his 12 works, would have built pillars to mark the point nearest to the West of his epic. In fact, it was the end of the known world at the time of the Greeks because after Gibraltar, should venture into the Atlantic. Navigations for the boats of the era were dangerous past this point, which was certainly that nobody dared too venture. According to Plato, the Atlantic was located beyond the pillars of Hercules, so in the world of the unknown…

Then, our taxi driver guide led us in a cave. None of us doubted that we would find a beautiful cave in Gibraltar! 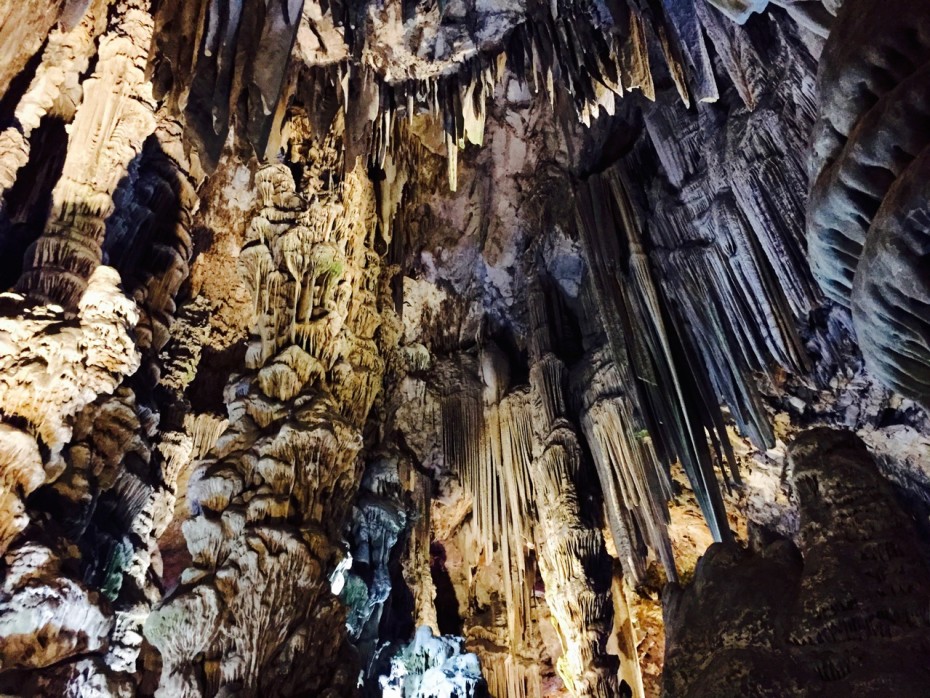 I admit that after seeing the Gothic churches of Seville, I think I know where the architects took their inspiration. 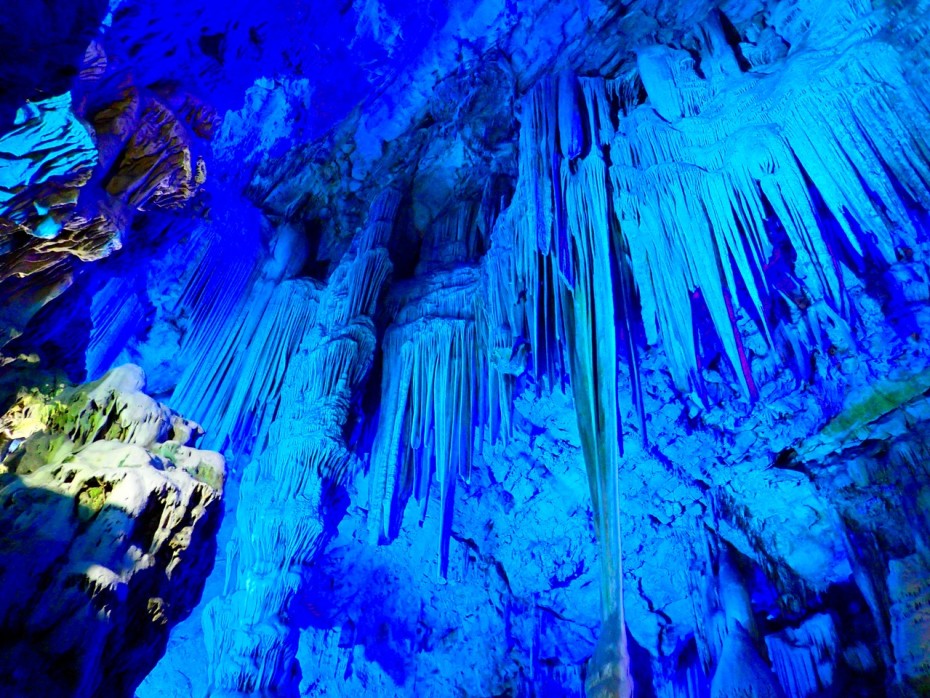 The cave is illuminated by lights of colors… It feels like in a nightclub! (And there's a music room in the cave for classical concerts apparently.) No boom-boom to damage the cave!

Then the taxi took us to the highest point of Gibraltar, where the view was magnificent. Beyond the horizon, we could see the Morocco. It's funny to be also near Africa!

Although children were enchanted by all the monkeys that surrounded us. They are apparently very well treated: doctors, cooks and observers to make sure that this community of 200 individuals remain for centuries…

Our general culture on the strategic importance of Gibraltar has also been increased. We finished our tour of the rock by a visit to the tunnels dug by the soldiers to make The Rock a quasi-imprenable fortress! The view is magnificent openings charged to point the guns on the horizon… 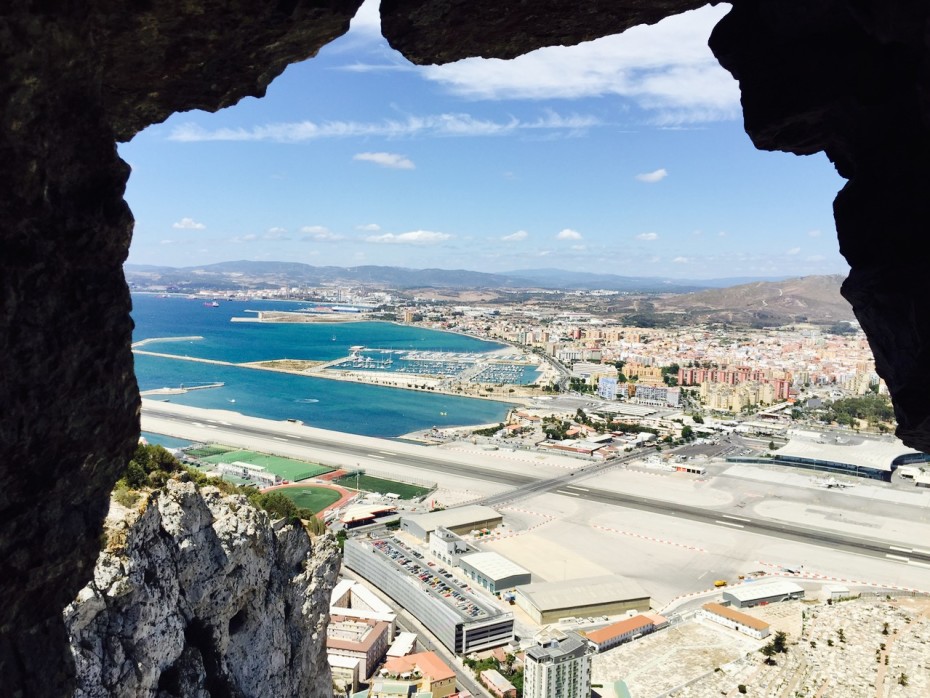 Him, there was no too sympathetic air. 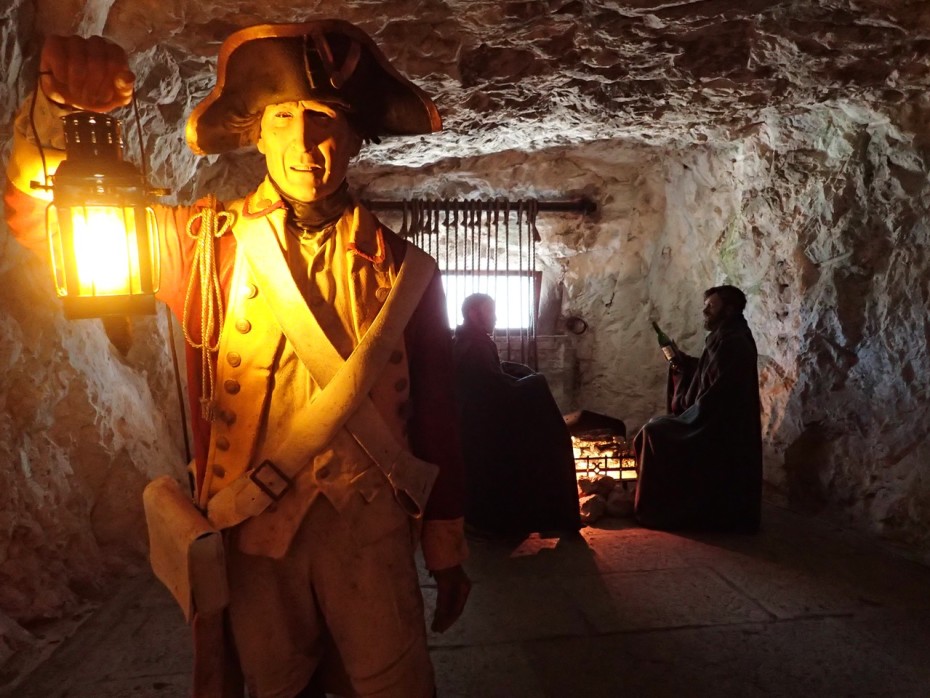 The room at the end of the tunnel. 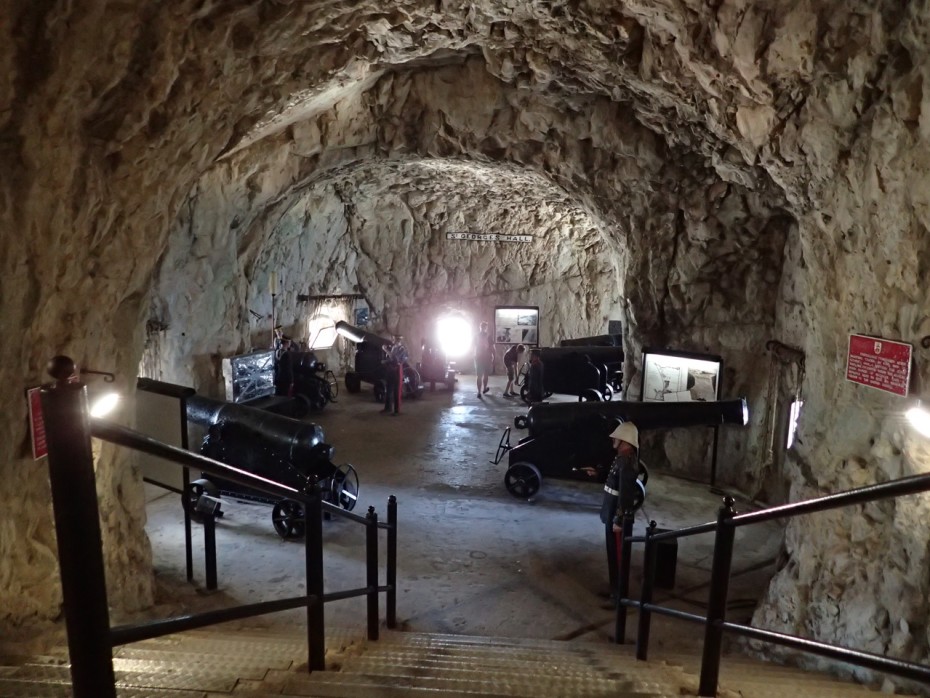 After half a day's visit, we will go to fill up with diesel (800 litres 0.37-@ pounds per litre) for a start around 6 pm. We get to Formentera, South of Ibiza two days and a half later…